This is not your daddy's B2B marketing campaign.

Being in the marketing biz, it’s hard not to notice a good advertising campaign when you see it, especially when it’s for a product you use. This one came in the form of a faux magazine cover.

I’ve been a Fast Company reader for well over a decade. I was surprised when I opened up the March issue to see actress and comedian Kathryn Hahn dressed as a pirate on the cover. Side note: I’ll freely admit that I’ve been a Kathryn Hahn fan since she debuted on the NBC crime drama series Crossing Jordan—in my opinion, a highly underrated early 2000s TV show. 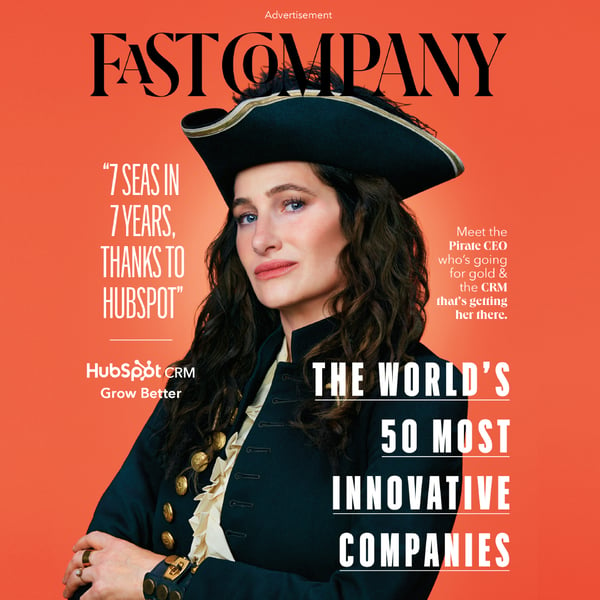 As I flipped through the magazine, I quickly figured out the cover was a clever ad for HubSpot. Hahn signed on as a brand ambassador for the company’s first-ever global ad campaign. The campaign blurs the line between business-to-business and business-to-consumer marketing, not to mention entertainment. If you need proof that B2B marketing is big business, look no further than the fact HubSpot hired legendary ad firm 72andSunny for the gig.

Morning Brew sat down with 72andSunny’s senior copywriter Whitney Yando and senior art director Clare Jensen to discuss the idea behind the campaign, the creative elements, and Hahn’s influence on the character.

On the hook: One thing the creative team had to make clear in creating this ad was just what CRM means exactly. “It’s not just like, ‘Hey, buy this Coca-Cola,’” Yando said. “We were trying to come up with a concept where you can share a lot of information—and especially what sets them apart from other CRMs—but then also make that entertaining and hopefully enjoyable to watch.”

Jarrrgon (get it?): Part of the fun in making the ad for the creative team was bringing in references to corporate norms and phrases. For example, Hahn’s character says the pillage, loot, and set-fire-to-the-village model of piracy is “ripe for disruption” and that she won’t let her customers “slip through the planks.” Yando said this is in direct reference to the way many speak at work, “almost like how robots speak about business, but I think when you pair it with a pirate ship, it becomes absurd and funny.”

Thar she blows: Another way the 72andSunny team brought the corporate world to the seven seas was through visual elements. While the Fast Company cover at 0:09 and map printer at 0:24 are some of the more obvious ones, there’s also an Easter egg at 0:26. “If you look for the parrots, you can see that they’re actually wearing little Britney Spears sales headsets, which was one of my absolute favorite additions,” Jensen said. In another version of the ad, Yando pointed out that they also have a pirate at her desk, sitting on a barrel-like a yoga ball.

Setting sail: In addition to running the video ads on TV and social media, the creative team also designed NYC ferry and bus wraps to make them look like pirate ships. Other out-of-home (OOH) elements, like painted murals, will be popping up in cities like San Francisco and Chicago. The team even created a special ad for the Fast Company “Most Innovative Companies” edition, in which readers will be linked to a video of Hahn saying congratulations from one CEO to another.

Hahn top of it: As her self-proclaimed No. 1 fan, Yando said getting Hahn involved was a huge win—and it paid off bringing a comedian onboard (pun intended). In addition to the energy she brought to the set, Hahn also added her own twist to the material, like ad-libbing the line at the end of the spot about valuing gold—but mostly customers.

This is yet another example of how B2B marketing doesn’t have to be boring. Far from it. Humor works in any industry. The best B2B marketers are shifting from methodical and rational advertising to entertaining and emotional messaging to create a meaningful connection with their audience.

Check out the campaign to see for yourself.