Tom Fishburne is my kind of guy. He’s got a great sense of humor, he knows marketing, and he’s a talented artist. His cartooning skills put him in a class with The Far Side’s Gary Larson for me. Fishburne’s recent Marketoonist cartoon struck a chord seeing how one of Revel’s core values is being humble. 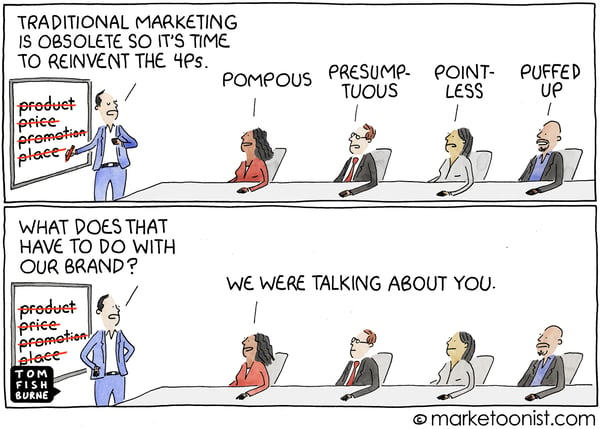 It’s easy to see when someone is being arrogant, self-centered, or pretentious, but what does it mean to demonstrate humility?

According to Positive Psychology, the word humble is derived from the word humus meaning earth, it appears to clash with our current valuation of self-worth and self-realization. The article goes on to add that humility has nothing to do with meekness or weakness. Humility is an attitude of spiritual modesty that comes from understanding our place in the larger order of things. It entails not taking our desires, successes, or failings too seriously.

The Greek philosopher Socrates held that wisdom is, above all, knowing what we don’t know. He taught an intellectual form of humility that freely acknowledges the gaps in our knowledge and that humbly seeks to address our blind spots. That’s one of the reasons humble people are better learners and problem solvers. That ties in nicely with Revel’s curiosity value.

Some would argue that too much humility is a bad thing. I think the opposite is true. Business author Patrick Lencioni would agree. His book The Ideal Team Player inspired me to write about the Detroit Tigers’ 1999 trade with the Texas Rangers that landed them two-time MVP Juan Gonzalez. On the surface, it looked like the deal of the century for the Motor City Kitties. Unfortunately, Gonzalez’s “me first” attitude rubbed teammates and fans the wrong way, leading to a forgetful one year and done career in Detroit.

According to Lencioni, ideal team players are humble. They lack excessive ego or concerns about status. Humble people are quick to point out the contributions of others and are slow to seek attention for their own. They share credit, emphasize team over self, and define success collectively rather than individually.

Being humble helps us be better teammates and co-workers. An article in Forbes pointed out a few of the benefits humble people enjoy: