Revel, creators of the Watch Muskegon community marketing campaign, are demonstrating their devotion to the city by being the first business to take up residence in a newly constructed six-story building downtown, said to be completed by fall 2018.

The marketing agency made downtown Muskegon their home over a decade ago, and said when they started to outgrow their space, it made sense to look for options within the community they loved.

"There's something about Muskegon's roll up your sleeves, get it done attitude that's in Revel's DNA. When we moved downtown in 2006, the community was in the process of reinventing itself. Fast forward a decade and we're excited to play a part in its continued resurgence. When we were ready to invest in a new office, as far as we were concerned, the only choice was downtown Muskegon,” said Jason Piasecki, Revel Partner and CEO.

When they heard of the 47,760-square-foot mixed-use building to be constructed at 351 W. Western Ave., Revel was the first to commit to a space, seizing the opportunity to help set the tone for future downtown business and residential development. Because the project stood to promote community revitalization, it was granted a $1.5 million state loan, and is estimated to create 29 full-time jobs with an average hourly wage of $19. 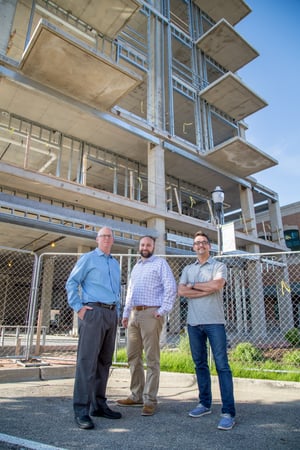 “We’re proud to invest, not only in the building, but in Muskegon’s continued growth,” stated Piasecki. “We’re growing right along with the community and are looking forward to moving into our new space.” He added, “We hope by further investing in downtown, we inspire other businesses to do the same.”

The first story of the new building will be occupied by another commercial business. Revel will be located on the second floor, and floors three through six are dedicated to 20 residential units appropriately called The Lake View Lofts because of their stunning views overlooking Muskegon Lake.

Pete Lounsbury, Creative Director at Revel, decided to go one step further than just moving his desk by making his own investment in one of the apartments above his workplace.

“I’ve spent pretty much every day for the last six years working downtown, so I’ve seen all the changes that have taken place, and I’ve become a huge fan of Muskegon in that time,” said Lounsbury. “There’s a lot happening here, I’ve gotten to know a lot of great people, and I like spending time here. So, I figured it was time to put my money where my mouth is and move here. Plus, you can’t beat the views...or the commute.”

With developments like the new mixed-use building, along with the Western Market, Farmer’s Market, wide-variety of restaurants and breweries, as well as the city’s proximity to lakes, parks and various activities, Muskegon is poised to attract even more residents and businesses in the coming years.

You can find out more about downtown Muskegon and all it has to offer at watchmuskegon.com, visitmuskegon.org, and muskegon.org. To learn more about Revel, visit revel.in.